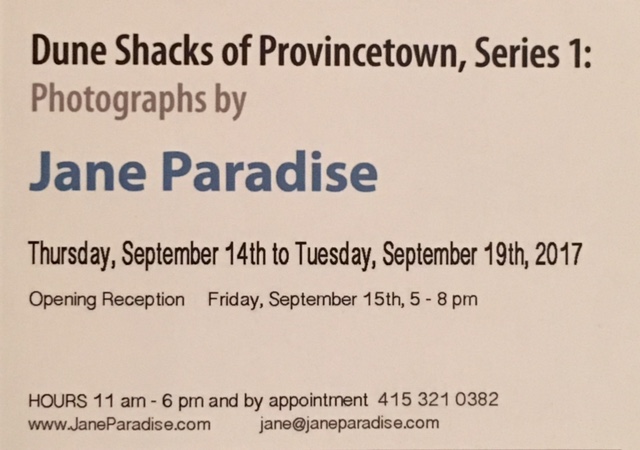 On the wild back shore of Provincetown Massachusetts writers, artists and families made summer homes in the early 1900’s. Affectionately called the dune shacks, some were originally life saving huts in the late 1890’s but most were constructed in the 1920’s and 1930’s out of debris and ship wrecked ruins.

Some of these original shacks survive today – some restored, some bandaged, some dilapidated – all loved. Each shack is unique with its own personality and its own name.

Through these photographs I am trying to give a flavor of what it is like to live in a dune shack and/or experience the dune landscape. Most shacks are occupied in the summer, very few in the winter. But the landscape is always accessible. 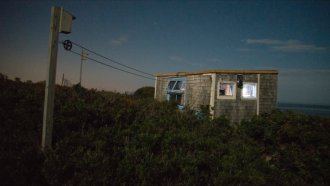 The nineteen shacks that remain are in an area called “The Dune Shacks of The Peaked Hill Bars Historic District“ part of the Cape Cod National Seashore. The shacks were originally built on public land – this was common in those days in Provincetown – the landing place of the Pilgrims. There wasn’t so much of a distinction between public and private land. You built a house and you lived in it. No one thought anything of it. Then the National Seashore (a welcome force) came along and swept 18 of them up into the bureaucracy. One owner had clear title to prove he owned the land and the shack. Other shack occupants signed different lease agreement with the Seashore. 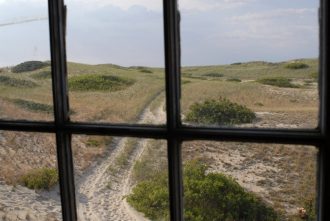 It is not easy to live or stay at a dune shack. It is about a 2-mile walk from your car, or, if you are lucky, someone “authorized” might give you lift over the dunes on one of the two sand roads. The shacks have no running water and no electricity. There are kerosene lamps for light and wells dug in the sand a walk away for hand pumping drinking and washing water. It is heavy going pumping and carrying those gallon jugs of water. Propane stoves are used for cooking, wood burning stoves for heat. If you are lucky you might have a propane refrigerator that works. Otherwise coolers are the order of the day in the summer. Outhouses are a short stroll away.

Coyotes will howl in the night, foxes will cry or scream; numerous animal tracks will envelope the sand around your shack in the morning. You wonder where all those tracks came from and how you didn’t hear a sound.

Solitude abounds with the sound of the sea ever present. 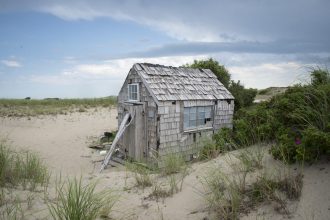 This is home for those of us who want to be (t)here, who are lost without the endless vista of sand, the crashing Atlantic Ocean waves, the whales, the seals, the sand, the night sounds, the night skies. We worry about the increasing popularity of walkers and incursion of the “public” on these fragile lands and structures. They will outlive us though. They have so far. We must believe that.

Within this backshore environment inspiration and creativity always flowed along side full moon parties and drunken revelries. Literature and the arts flourished in this simple lifestyle, as did the families who have summered for generations here. 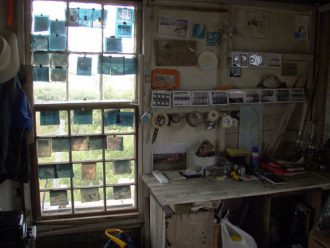 Eugene O’Neill owned, lived and wrote for summers in an old coast guard station in the dunes. It fell into the seas as the dunes receded. Mabel Dodge Luhan, a patron of the arts, held forth in the dunes with Jack Reed who is best remembered for his first-hand account of the October 1916 revolution “Ten Days that Shook the World.” Later on, in 1981, Warren Beatty would play him in the movie “Reds” where the opening scenes were filmed on the Provincetown dunes. Scenes from the 1968 “The Thomas Crown Affair” with Steve McQueen and Faye Dunaway were shot on these dunes.

The author Hazel Hawthorne owned a shack and came here “with the thoughtful intention of living directly and truthfully.” Harry Kemp the poet lived in what may have been a converted chicken coop and wrote numerous poems about the dunes. Other visitors to these windswept shores were e.e. Cummings. Jackson Pollack, Willem de Kooning, Tennessee Williams, Walker Evans, Charles Demuth and Jack Kerouac who wrote part of “On the Road” here. 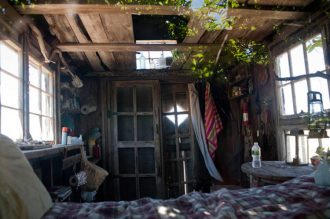 Modern day writers, artists, poets, dancers, and scientist still apply for residencies and flock here for the solitude, the love of the land and the creativity it inspires. Families still come and raise their children, grand children and great grand children. Memories are created.

Marsden Hartley may have summed it up best in his autobiography “What a summer – in among those amazing dunes – shifting with the wind before one’s eyes – burying young pine trees to their tops – moving incessantly… Whoever will forget those dunes – once having seen them – and the great rumbling, dramatic “outside” as it was called – the ocean itself, the long stretch of lovely sands, and nothing else.”